Posted at 22:30h in Uncategorized by advancedrep 0 Comments
0 Likes 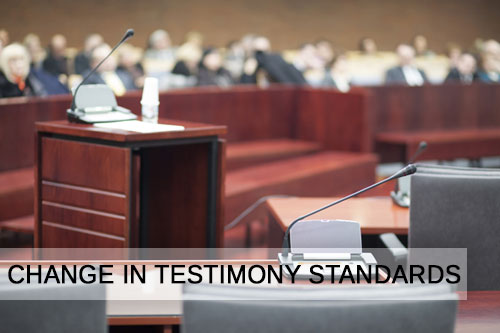 In the joint letter, the in-house counsels urged the Administrative Office of the U.S. Courts’ Advisory Committee on Evidence Rules to clarify Rule 702, which sets the standards for the use of expert testimony. The committee is currently considering an amendment to the rule and may reach a decision at its next meeting May 8, according to a report by Law.com.

“Too often, courts do not fully execute or enforce the ‘gatekeeping’ obligation,” the in-house counsels wrote in the letter. “Instead, we see courts allowing juries a role in deciding whether an expert’s opinions have the requisite scientific support without first ensuring that the testimony is the product of reliable principles and methods and is reliably applied.”

They added that “confusion about the court’s role in assessing these foundational requirements results in the admission of unreliable opinion testimony that misleads juries, undermines civil justice, and erodes our stakeholders’ confidence in the courts.”

Rule 702 was originally drafted in 1993 to give effect to the U.S. Supreme Court decision in Daubert v. Merrell Dow Pharmaceuticals. The in-house counsels recommend an amendment that would “remedy the inconsistency in practice” by clarifying: “(1) the proponent of the expert’s testimony bears the burden of establishing its admissibility; (2) the proponent’s burden requires demonstrating the sufficiency of the basis and reliability of the expert’s methodology and its application; and (3) an expert shall not assert a degree of confidence in an opinion that is not itself derived from sufficient facts and reliable methods.”

Many are members of Lawyers for Civil Justice, a nonprofit trade association that focuses on the fairness, costs and efficiencies of the civil justice system, according to Law.com. The group made the letter public.