10 Rules of Etiquette When Working With a Court Reporter

Posted at 22:59h in Uncategorized by Byron 1 Comment
0 Likes 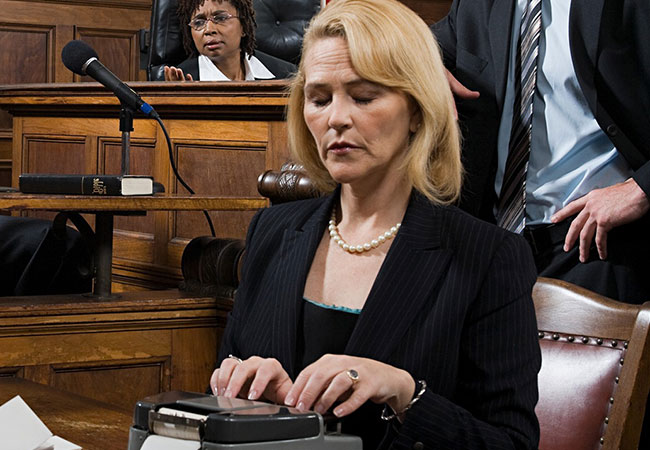 When taking a deposition, there are many rules of etiquette and good manners that are unwritten. Seasoned attorneys will know how to conduct a deposition using these best practices simply from experience. If you are relatively new to depositions, we have compiled a few points of etiquette that will help your court reporter provide an accurate transcript and do a great job for you. Your court reporter will be grateful to you if you follow some of these simple rules.

6. Provide spellings of case-specific terminology.
Your case may be filled with terminology that is specific to a certain industry. Your court reporter, while experienced with the terminology of many industries, may not know every term or phrase you will be using in your deposition. The same is true for names of people mentioned in testimony, and street and city names. It is a good idea to provide a list of spellings of names, phrases or terms to the court reporter as they come up in testimony. The spelling can be provided on the record, or written down on a list for the court reporter to take and use when transcribing the testimony.

8. Read slowly when reading out loud from a document.
Reporters are trained to be able to take down the spoken word at over 200 words per minute. However, most people will read at a more rapid rate of speed than they speak during conversation. If you are reading from a document, be sure to keep the speed of your reading at the same speed as you normally speak. Your court reporter will greatly appreciate your efforts.

10. Take regular breaks.
Sitting in one place for extended periods of time can be just as physically exhausting as constant movement. During long proceedings, you and your court reporter need a little time to stretch your legs and get a mental break before continuing with the proceeding. Everyone will benefit.
By following these simple etiquette rules, you will be using good manners and showing respect to your court reporter and to all parties in the room. Good manners can help create a comfortable work environment in a deposition and allow your court reporter to do their very best work for you.